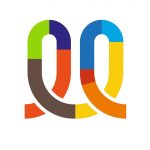 An exhibition dedicated to the Fashion Revolution, why it was created and the importance of joining a more sustainable fashion attitude. Some clues of how to join a more responsible consumerism of the  garments we wear.

Everytime we buy we make a choice, and through a conscious choice we can make important changes, all together. Let’s discover together how easy it can be. 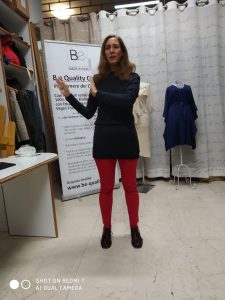 Pilar Morales & Giorgio Dalfiume, after our last pesentation together at Centro Natura. 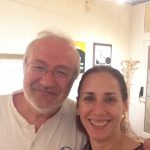 Promoting the collectiveness wellbeing through a conscious consumption on our everyday life . Little gestures that make the difference not only to us, buy to communities on the other side of the world. 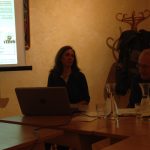 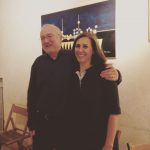 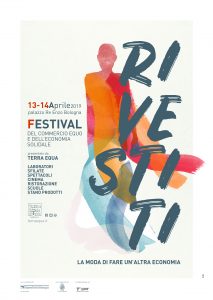 Fair Trade show dedicated to Fashion, to create a new Economy, based on respect of workers and the planet. As an alternative to  Low Cost fashion, which has a high social and environmental cost.

B.e Quality is proud to be one of the exhibitors and speakers about Responsible Fashion in this unique occasion in Italy.

Palazzo Re Enzo, Bologna, a wonderful cornice for Sustainable Fashion 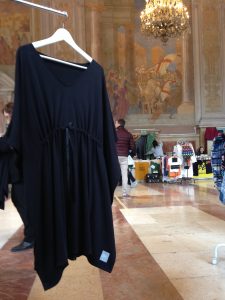 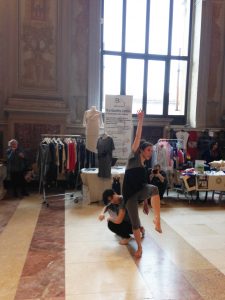 As a background for the exhibition we have used oil painted body shapes to remember all the victims of the Fashion Industry, so that the visitor can be aware that there’s always someone behind the garments he/she buys. 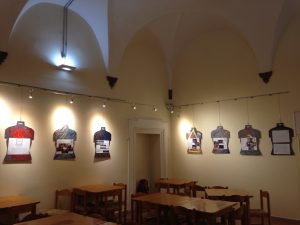 First Hall, What happend the 24 April 2013 in Bangladesh and how does Fashion Revolution works 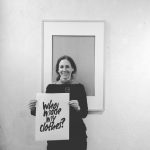 In the second Hall we have created a space with all needed to take a selfie asking: Who Made my Clothes?

SLOWFASHION: Slowing Down is Good for our Wellbeing.

How through our buying choices and consciousness we may improve our wellbeing, inside & outside.

Body languag expressing the concept of Alternative times to Slowdown and Remain still in life, a way to re-discover ourselves. 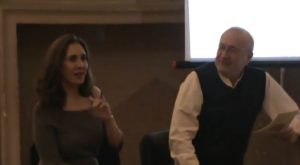 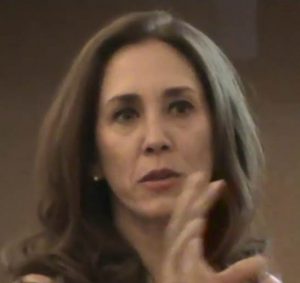 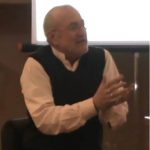 INNATEX is the only natural textiles fair in the world to feature not only fashion, but also other textile product categories such as accessories, home textiles, fabrics, toys etc.

INNATEX is the only natural textiles fair in the world to feature not only fashion, but also other textile product categories such as accessories, home textiles, fabrics, toys etc. For professional visitors. 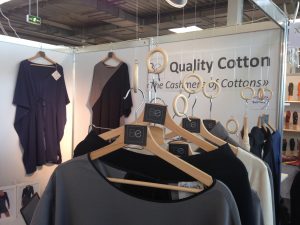 My dream is to create a successful business based on Respect. And that in some way helps me to live in a more balanced way.

A question someone asked me many years ago is what inspired me: how would you act in this situation if you were Love?

In that moment my brain was saying: Whaaaaat??? and went out of it’s automatic mode. This helped me to see further… and understood that both in the mid and long term, the best solution is to allow the Love guide my choices and my actions (and not fear, sadness, insecurity, anger, pride, ambition, etc…).

How may I combine my professional skills with this and how can I share this with others? The answer to this for me is the Love Collection, a small collection of garments that have the intention to remind us to practise more the gestures of Love, that warm our hearts! And that is why I have created the Love Collection: to remind us (me at first) to act guided by Love. 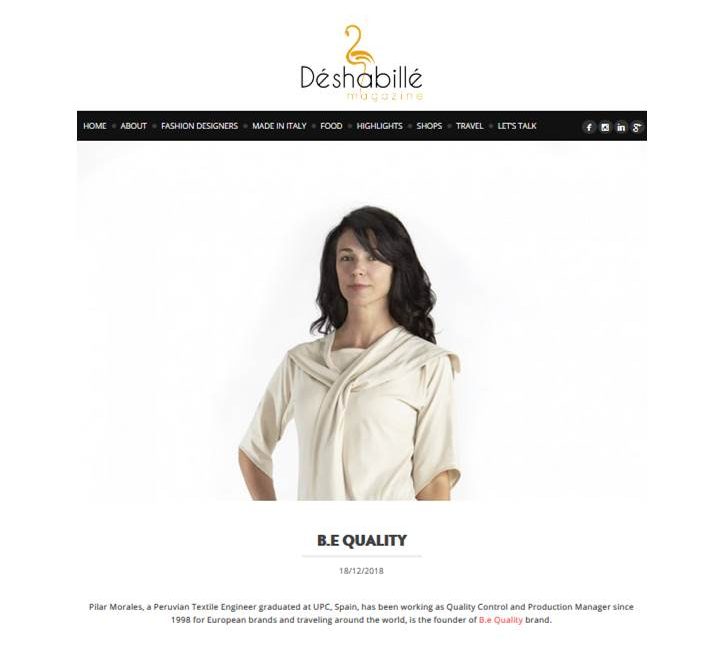 ..go to The Love Collection

Pilar Morales has blue and shining eyes, and if it were not for its Spanish accent, it would seem she came from the North. Instead she is Peruvian and exudes warmth like the rocks of the Andes at sunset, which have absorbed the sun’s rays all day long. Pilar is a textile engineer, like her father, has 20 years of experience in the fashion industry in Europe and a dream: producing hugs. Or rather weaving and selling them as clothing, a concrete and extremely supportive project born from a feeling, love, that is what the engineer feels for mankind and nature, two sides of the same coin which, due to progress, are moving away more and more from each other, creating emotional and psychological imbalances on an increasing number of people. To say it there are numerous scientific researches that see as a solution the recovery of the touch with themselves. First of all physically, to go back to feel real needs and not those imposed by society. This is where the ‘Love Collection’ by the South American designer comes into play, a capsule collection that is a naturale continuation of Be Quality, the brand founded by Pilar.
You wear love, Pilar says. Starting right from hugs, because hug is a primordial gesture that expresses affection and protection and is good, research on this, even for the heart. Even more the garments of this particular collection are made of a particular Peruvian cotton, the Pima, a very ancient plant cultivated and already worked by the Inca, who considered it a gift from the gods and in fact is known as the ‘cashmere of the cottons’, a material that Pilar would like to make it more accessible, not as niche as it is now. Soft and shiny, it amplifies in contact with skin the pleasant sensations that the ‘Love Collection’ proposes to give, the same sensations awakened by a love story, in this case told by different items of clothing, scarves, t-shirts and dresses and by a series of gestures, the first of which is the hug.
….read more 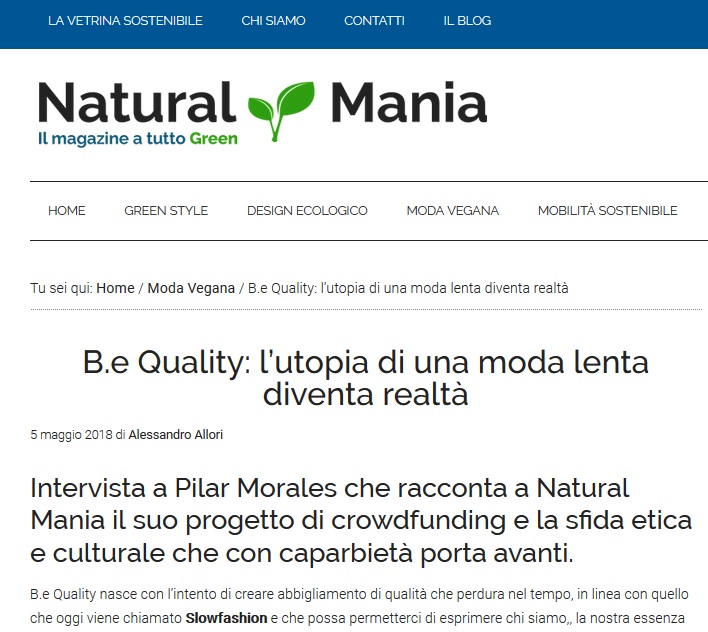 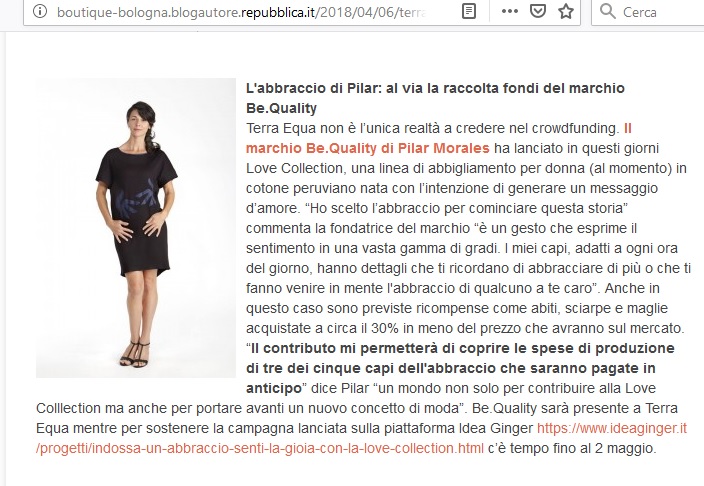 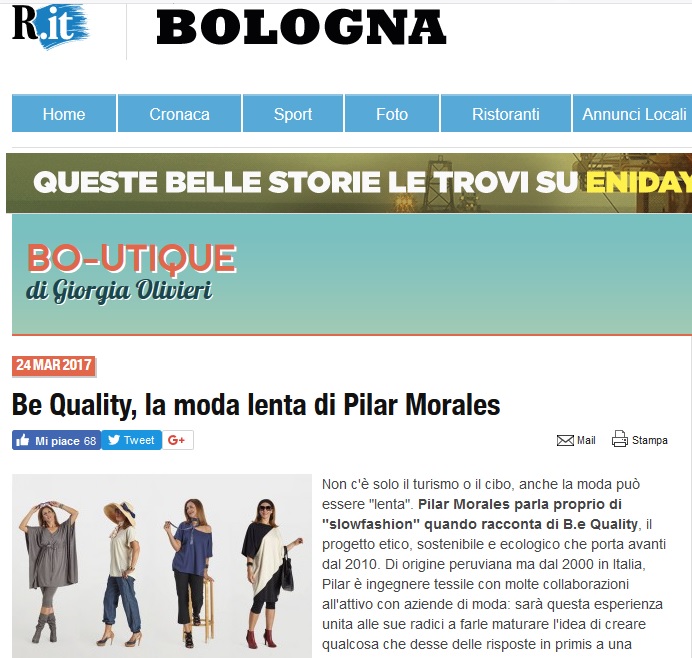 B.e Quality site uses cookies to ensure a better browsing experience and to offer you, when you’re online, personalized advertising messages in line with your preferences. By selecting “I Accept” or access any content on our site you consent to the use of cookies.